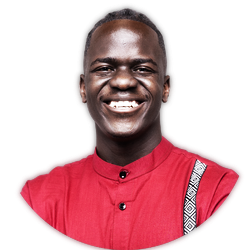 DUKU'S PRESENCE WILL MAKE YOU REALISE THE FUTURE IS STANDING RIGHT INFRONT OF YOU.

Duku Fore possesses an unyielding work ethic and personal drive. His desire to awe inspire individuals has led him to many accomplishments, being an internationally renowned inspirational speaker, Entrepreneur, TEDx speaker, UN Youth Delegate and LinkedIn Youth Editor. His accumulated knowledge and experience are seldom found even in the most travelled of people.

It is hard to believe that Duku came from such humble beginnings, being born with a speech impediment and raised in a Ugandan refugee camp. But opportunity reared its head when he was 10 when upon being granted a refugee visa his entire family relocated to Australia. Arriving on foreign shores he could not speak English fluently with his entire vocabulary encompassing a single word, YES. However, this proved fortuitous for Duku as on his 1st day in school a girl asked him out in which he responded confidently “YES”. That’s the story of how a single word led to him obtaining his first girlfriend in Australia. But this also had its downside as this led to Duku struggling in school, unable to quickly learn the language and being occasionally bullied as he could not speak well. Duku was not one to take these insults lying down and unfortunately, he started getting into fist fights with his tormenters resulting in his expulsion.

It is at this point that Duku realized that he had to make a change and that he was taking the very first strides down the wrong path. Summoning the will to reject where these choices would lead him, he overcame life’s challenges and now dreams to inspire and challenge others to see life in a different light. Starting his dream journey of becoming a public speaker in his bathroom, Duku knew that this was not the best way to start. However, he believes whenever you have a dream/goal/idea you do not need to be great to start but you need to get started to be great. This belief to simply attack your goals has resulted in many opportunities for Duku. He has been invited to travel to various conferences, events and schools to inspire others regardless of individual circumstances. As well as being selected to be an Australian Delegate at the UN Youth Assembly which was held at the organization’s NY headquarters.

In the broader community, Duku is a person known as a man whom accomplishes whatever he sets his mind towards. His aspiring nature and insatiable appetite for learning sets him apart from the rest of his peers. The boundless motivation and enthusiasm are what draws like-minded people to him so that they work with him to achieve notable projects. As Duku continues to chase after his dreams and make strides for societal change, one thing is for certain – he is someone to look out for in the near future.

BE MENTORED BY DUKU

JOIN DUKU UNIVERSITY AND FOLLOW DUKU'S JOURNEY FROM HIS BATHROOM TO HIS CURRENT STAGE. YOU WILL GAIN ACCESS TO LIVE CALLS WITH DUKU, EXCLUSIVE DISCOUNTS ALONG WITH PRIVATE DU. U. MEMBERS.